Just some more general information updates regarding getting the site back to it’s former glory.

I had a review up of a La Patrie Etude – but the sound samples disappeared when all of the site images were lost. So I’ve updated the page with a new recording. One more thing checked off the list of getting the site back into ship shape! You can find the video below, or also in the reviews section.

In the process of cleaning up the site and trying to restore lost images, I’ve managed to finally get a number of them back. The ones that are still missing are the J-11 build and the Handplane making Tutorial. As a result I will try to have those fixed over the next couple of days, because I know that I have those ones backed up.

I’ve also removed some old materials that were no longer needed. I got rid of the Cocobolo Uke build, the OM-11 build, and some other stuff (don’t worry, it’s mostly stuff that sucked anyways!).

That’s it for now! Cheers ~ Murkar

So I decided to update the header image for the website – hope you all like it! I figured that a new Era called for a slightly different image, and I thought it was time for radically different look.

While in the past I’ve had pretty traditional pictures of Guitars, Paintings, etc., I went for something more modern – but combined with a traditional painting featuring a guitarist. The figure is a portrait of Monsieur Aublet, by French painter Guillaume Voiriot (Circa 1782) which I obtained from the online archives of the Metropolitan Museum of art.

And, for your viewing pleasure, a blast from the past! I attached all of the headers that have been used for the website in the past below.

Check it out! Kickstarter campaign for the new Kauer Guitars acadian – offering T-Shirts, signed albums, and a bunch of other cool stuff for your support! Soon this guitar will go into full production, with a little help from some friends 🙂 There is actually a lot of cool stuff there – not to mention pictures of amazing guitars. CLICK HERE TO CHECK IT OUT! 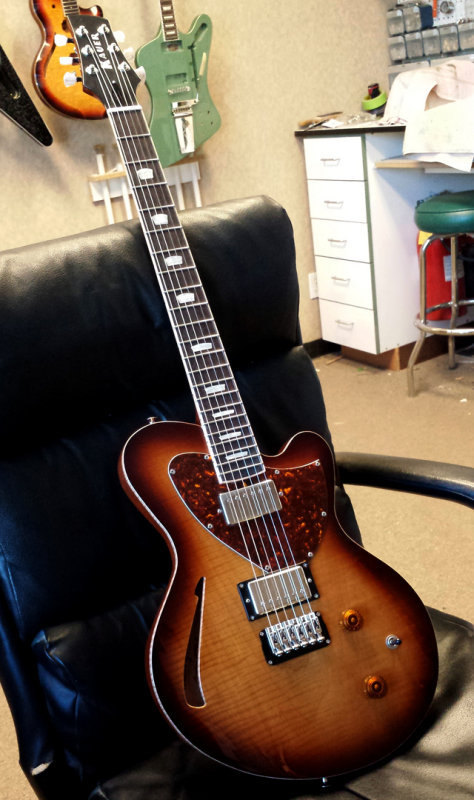 You can visit the store by clicking here.

All for the moment!

Now that spring has gone, I figured it was time to go back to a black and white header! It has been updated wit ha new image. In addition, new photos have been added to the image gallery! One of the new photos that I added is below. That’s it for the moment!

I’ve been away for nearly a month now for work, and unfortunately it has definitely shown on this blog! Time to get cracking I guess and work on my current projects a bit. I am basically posting this to prove that I am in fact not dead, and that I do still build instruments.

A couple of things have been going on. The first thing to mention is a more personal announcement. I try to steer away from those on this blog, because everybody knows that nobody wants to read about me (rule #1 in writing – don’t talk about yourself if you want other people to read it, nobody cares!). However, I’m moving away – four hours from home. Which means that I will be living four hours from my workshop. As a result, while I will try to keep this place updated as best I can, things will be slowing down for a while (at least until I settle into my new home a couple of months from now).

Secondly…I’m writing some guitar building articles. I know, that’s another personal thing – but I bring it up because I am going to be making some information available for download here for free soon. I am making a lutherie magazine, and designing it completely myself (including all of the typesetting – which means I can include some of the chapters of the E-version in .PDF format here for everyone).

Finally…shop update. I haven’t been doing too much with everything that’s been going on here, but I have made some progress. I have some things to write – mostly about microplane zesters/graters. That will come in a couple of days! Until then, here are some workshop photos to prove that some things actually have been going on here recently. That’s it for now!

I haven’t had time to post anything recently…not time even to look at comments etc. However I wanted to quickly share this before I have to go back into the cave in a few minutes (a.k.a. the workplace). There is a new community for Luthier’s, and it has a lot of people there to share information, builds, etc.

A good place to share your work, to see what others have done, to talk about techniques and tools, etc. – click on the image below to visit and make an account.

Back to the cave now.

The image gallery has been updated again! I’ve also finished another handplane – well, it is not quite there yet, but will be done tomorrow. It does not have an iron yet but I should be receiving it tomorrow. When the sun rises I will get the sides to a satin finish and polish the chamfers on the edges to a mirror finish. I was very generously given some Ziricote recently, so that is what this plane is made of.

The pictures of this plane are all in the image gallery now, I figured there have been enough handplane updates for now until I get the Krenov tutorial going.

All for now!
~Anthony Murkar

Somebody commented asking about making planes…so I thought it would be a decent idea to show how to go about making a Krenov smoother fo anybody who is interested in making a wooden handplane.

There are some OK tutorials online, but most of them don’t really talk about what makes a plane good. If you want your plane to cut well there are a few things that are important to know when making your Krenov. In addition, I’m making a plane for a friend (probably from Ebony) – so I will be recording the whole process of making a smooth plane from start to finish. That way anyone who reads the tutorial should hopefully have the knowledge necessary to make a smooth plane completely (from start to finish) by the end of the tutorial.

This will be a small smoother, with a 36 mm blade. I am hoping that the iron arrives later today so that I can get started this evening. I will begin posting the lesson as soon as I receive the iron.